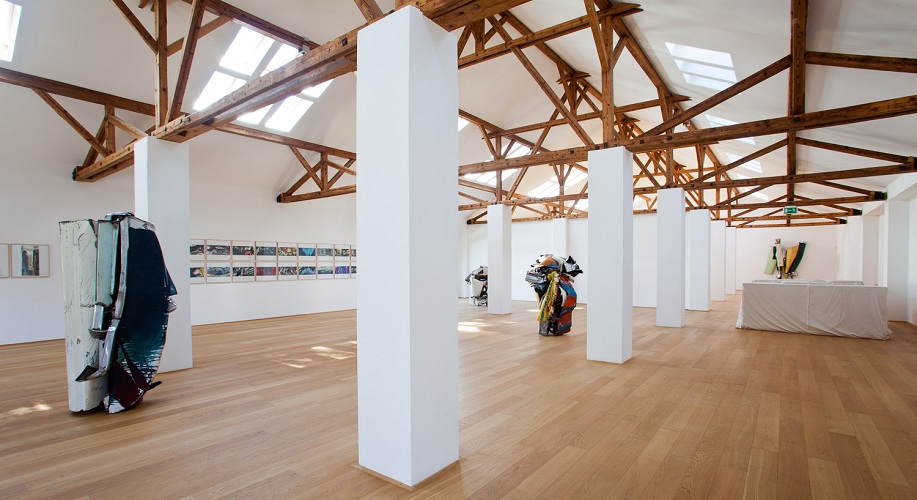 John Chamberlain discovered his love of metal as a material in the 1950s. Trained and teaching at the legendary Black Mountain College in North Carolina, he first oriented himself to the metal sculptures of David Smith, before starting from 1957 above all for the processing of autosheeting enthusiasts and in doing so with for the art comparatively Unusual tools such as metal press and welding torches. In this way he not only relied on the sense of form of the abstract expressionists in sculpture, but also gave decisive impetus to the pop art with his everyday raw material.

He folded and composed shapes of vivid expressiveness from bulky, mostly lacquered and painted sheets of traces.

The sculptures exhibited here range from the reluctantly colored ones from 1969 to the mainly in strong primary colors of the early 80s. Bulky Altblech adds to seemingly playfully light compositions which, inspired by poetic or humorous titles such as "Lorelei's passion" or "Grandma's hat", evoke figurative or figurative associations.

The monumental seating landscape "Wiley's Islands" belongs to the complex of Chamberlain's work of polyurethane foam, which, especially in the 1960s, transformed the process of bending and forming into an alternative material.

At Chamberlain, photography has been an essential element of his artistic work since the end of the 1970s and has always been a "self-portrait of his nervous system", according to the artist. For the series shown here, he used the panorama function of a "Widelux" camera, wherein the light tracks in the recordings produce a similar effect as the chromed bumpers in the colored sculptures.