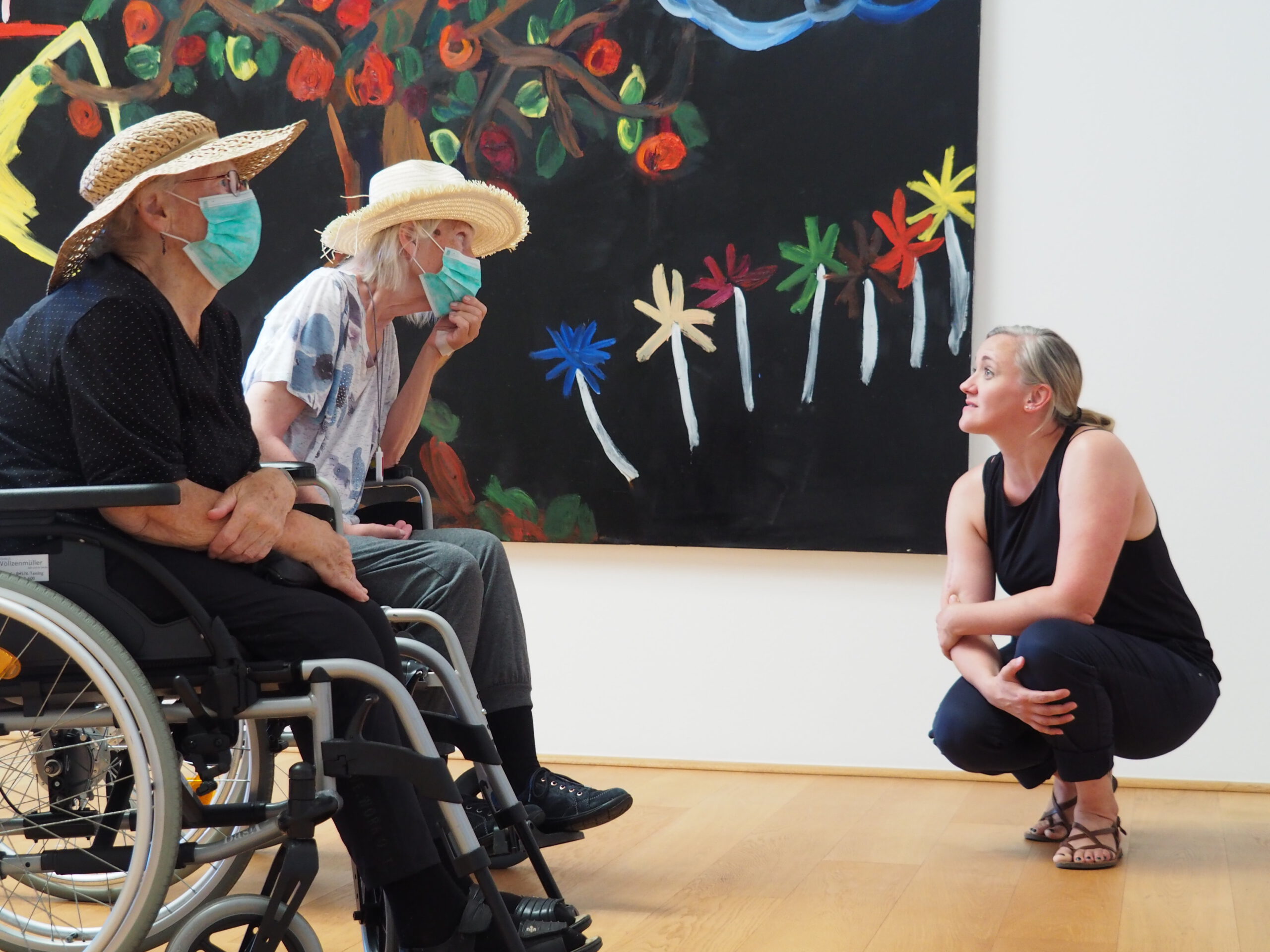 When Wort:Bilder was launched in 2013, it was one of the first museum offerings for people with inclusion needs in Bavaria. The stage poets, psychologists and pedagogues Pauline Füg and Dr. Henrikje Stanze had exclusively developed a project for DASMAXIMUM that was developed at the Museum of Modern Art in New York and combined art viewing with poetry.

After two years of corona-related break, the joy on all sides was now great that Wort:Bilder 2022 could take place again. So all sessions were quickly taken and some institutions like the Wilhelm Löhe Förderzentrum or the socio-therapeutic Selberdingerheim in Nussdorf had to be put off until next year.

However, the joy was initially dampened by the fact that Pauline Füg, part of the tried and tested Wort:Bilder Duo, was only able to take part in one session due to illness. With incomparable verve and performance talent, however, Rikje Stanze, now a doctor and professor of nursing sciences at the Bremen University of Applied Sciences, single-handedly impressed all the groups. Julia Pfeifer, head of the social psychiatric service of Caritas in Traunstein, wrote: "I am pleased that it worked out and that everyone involved enjoyed it very much. I have received positive feedback from our visitors without exception. I think the group poem is beautiful, one of the most beautiful I have read so far.." Anna Ruhland from the Pur Vital care center in Traunreut also wrote: "Once again, I would like to thank you very much for this perfect, dementia- and senior-friendly event."

Especially for wheelchair users, the offer at DASMAXIMUM was eagerly awaited, as the caregivers of Lebenshilfe told. Transportation is often costly and difficult, but from Lebenshilfe or Pur Vital, those affected can simply be pushed to the museum on foot. Thus, the tango group of Lebenshilfe (seniors with mental disabilities) came with numerous familiar faces, who, like Rosa or Georg, have been with us since the first edition of Wort:Bilder. As in previous years, the openness and joy of this group's contemplation of art delighted caregivers and contributors alike.

The great heat and caution with regard to Corona decimated the group size from senior submissions. The Pur Vital and the senior garden Auszeit from Traunreut participated nevertheless. Here, the therapeutic approach of working with poems, which can contribute to memory rehabilitation and brain activation, was particularly well demonstrated. It was touching to observe how a senior citizen with severe dementia could be coaxed out of her twilight state and gently motivated by Rikje to speak.

Rikje also succeeded in gaining the attention of the participants at the psychosocial institutions (psychosomatic ward of the children's hospital in Traunstein, psychosocial group of Caritas Traunstein). Talking about the pictures and the poems, some began to open up. Especially the group poem at the end of each session motivated almost without exception all children and young people of the PSO to contribute something. Proudly, they wanted to take "their" poem home right away.

The Caritas group also allowed moving insights into their inner world at the end of the session. The Traunreut youth settlement took part in Wort:Bilder twice with its assessment orientation class and apprentices. These groups also inspired with their impartiality and imagination. It was often noticeable how good it was for the young people to experience that all their answers are valued, that there is no right or wrong. The same applies to the group from the Hertzhaimer Gymnasium in Trostberg, which impressed with its group poem before Chamberlain's "Hairless Chiffon" on the subject of infinity.

In contrast to the last editions, the closing party this year took place in the same week as the sessions. Heat, Corona and above all the difficult staff situation in many facilities, which made it difficult to go on an excursion twice in one week, meant that only a small group of people celebrated. At the end, however, everyone agreed: definitely again in 2023!

We would like to thank the Friends and Sponsors of DASMAXIMUM, meine Volksbank Raiffeisenbank e.G., the Traunstein District Office, Georg Mehler and Monika Bienstock for making the 2022 Wort:Bilder issue possible through their financial support.